Two weeks ago I took a class that was scheduled for 8-5 but ended an hour early. This was a most blessed thing since it was an emotionally as well as intellectually intense experience, and I had a blasted headache.

As I drove home I realized that I could take a slight detour and go to Adoration. I just wanted to go to bed, but I would have stayed for class had it not ended early, so why not take at least some of the time for Adoration instead?

I arrived about 5:00pm and the chapel had three men in it, all of working age, none together. I think perhaps another one or two came and went as well, though I was not paying much attention.

I slumped into the kneeler, wondering what I used to pray when I would go to Adoration for hours at a time without touching a book.

I know that I used to think with God a lot.

The problem with being away from prayer is that it starts to feel as though one needs to pray, and goodness knows I have never been good at that.

Time passed. One by one, the men left, including the one whom I had identified as the scheduled adorer.

I felt some mixture of righteous indignation and confusion. You don’t leave Adoration when it is your scheduled time. You just don’t. If your replacement has not arrived, then you should at least talk to someone there to insure that they can stay for another hour. And if you can’t do that, then you need to kick everyone out and lock the door. Or something.

I’ve never actually been a scheduled adorer, I just have these rules magically ingrained in me. And one of the reasons that I had not stopped more recently at this Adoration Chapel was that the last time I had dropped by it had been closed, even though it was during normal hours. So clearly they had some procedure for closing it down.

I knew that I was going to have to wait because this was not an issue of broken protocol for me. It was just one of those things that I somewhat randomly happen to feel strongly about.

I wondered how long I would wait. I checked the list to make sure that someone was scheduled for this hour and the next one. I knew that I would obviously wait an hour, but how long would I stay if no one came then?

Probably three hours. Yeah, that sounded right. Back in my hardcore days I would have just sent Josh a text and stayed all night, but those days are no more. After three hours I would find some way to call a priest and close it down.

I went to the bookshelf. This parish clearly had both a serious identity disorder and low level of intellectualism. Or else maybe someone with similar taste to me had stolen all of the good books. I passed over all of the cheesy Protestant books, anti-Rome style sister books, and stupid psycho-trad books, and pulled a new translation of the Spiritual Exercises. I’ve read it before, and I know that it is not meant to be read as a book, and that I am not meant to work through it alone. But I was desperate, and I knew that it at least would not be stupid.

Besides, I am no longer used to being alone with God for long, and reading even the Saints can be a great way to prevent oneself from absorbing too much God, too soon.

I read a few sentences. It was good.

Suddenly I realized that I was alone. In an Adoration Chapel. With Jesus. Alone.

It had been so long. 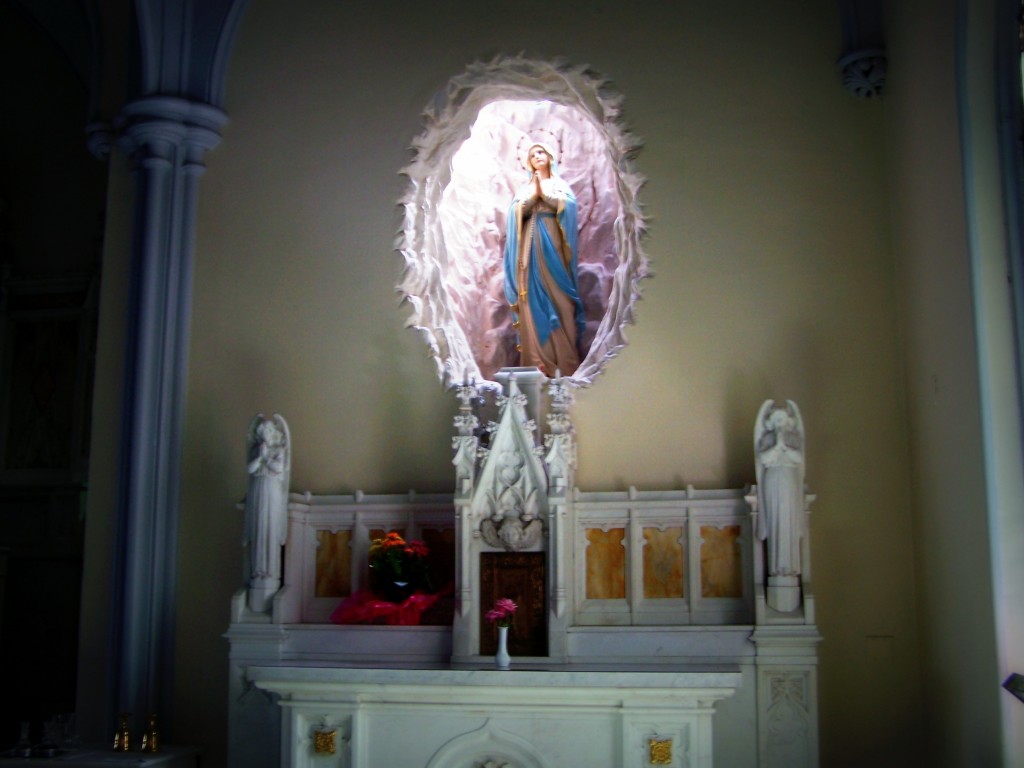 Our recent parishes have been the sort where the tabernacle is kept front and center in the Church. This is all well and good for abstract symbolism, but, in my experience, it is a poor way to cultivate reverence, and it makes quiet prayer in front of the tabernacle impossible, rather than normal, the way it had been in four of my previous parishes.

Prostration came as naturally for me as it always had, back in the days when I would wait and pray long enough after mass when finally everyone would leave and I could be alone.

I remained there for about ten minutes.

I heard a noise in the hall and returned to my kneeler to pray for a little while longer. Soon the room was full of people. At least it felt that way as there were perhaps eight in separate groups.

I replaced the book and left.

As I got into my car I saw the pastor drive up and start to walk toward the office. I did not know for sure that it was the pastor (I have only seen one of the other priests before), but I was pretty confident. I thought of stopping him to ask about whether they had a procedure for Adoration that had fallen through and perhaps needed to be updated.

Instead I said a prayer for him. At first I reasoned that there was no way that there could be an ongoing issue without him already knowing. And if he already knew, then there was no reason for me to concern myself with how he handled it. He must be exhausted.

What are the chances that I should get to spend such time alone with my God?

Just listen and ignore the visual.