John of the Cross Novena: Day 8 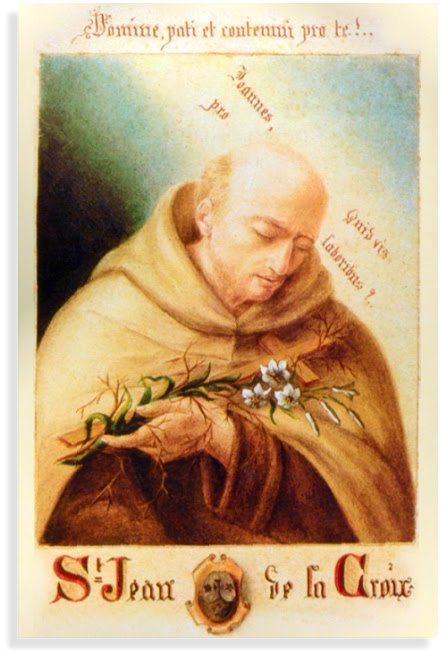 O glorious St. John of the Cross, through a pure desire of being like Jesus crucified, you longed for nothing so eagerly as to suffer, to be despised, and to be made little of by all; and your thirst after sufferings was so burning that your noble heart rejoiced in the midst of the cruelest torments and afflictions.

St. John of the Cross, my glorious protector, in your lifetime you were the father of the poor, the consoler of the afflicted and the assured refuge of the suffering; you worked miracles of charity for all, miracles which you repeat even now by means of your holy images and relics.

Deign also to be my consoler and my father; comfort me in my sorrows and aid me to see in every cross a pledge of divine mercy that, through the cross, I may gain heaven.

Obtain for me, too, the special grace I ask through your intercession during the novena, if it be for the glory of God and for my salvation (make request).

Only the saint and God can tell what distant echoes of an utterly alien everyday common life penetrated the darkness of the jail cell and the infinitely deep sleep of the peace in which his soul lay hidden in God. Touch not the wall . . . but the religious police could not disturb the ecstasy of one who had been carried so far that he was no longer troubled at the thought of being rejected even by the holy!

No one can become a saint without solving the problem of suffering. No one who has ever written anything, outside the pages of Scripture, has given us such a solution to the problem as Saint John of the Cross. I will not speculate upon his answers. I will merely mention the fact that they exist and pass on. For those who want to read it, there is The Dark Night of the Soul. But this much must be said: Sanctity can never abide a merely speculative solution to the problem of suffering. Sanctity solves the problem not by analyzing but by suffering. It is a living solution, burned in the flesh and spirit of the saint by fire. Scripture itself tells us as much. “As silver is tried by fire and gold in the furnace, so the Lord trieth hearts” (Prov 17:3).

“Son, when thou comest to the service of God, stand in justice and fear and prepare thy soul for temptation. Humble thy heart and endure: incline thy ear and receive the words of understanding and make not haste in the time of clouds. Wait on God with patience: join thyself to God and endure, that thy life may be increased in the latter end. Take all that shall be brought upon thee, and in thy sorrow endure and in thy humiliation keep patience. For gold and silver are tried in the fire and acceptable men in the furnace of humiliation” (Sir 2:1-5).

Sanctity does not consist in suffering. It is not even directly produced by suffering, for many have suffered and have be come devils rather than saints. What is more, there are some who gloat over the sufferings of the saints and are hideously sentimental about sufferings of their own, and cap it all by a voracious appetite for inflicting suffering on other people, sometimes in the name of sanctity. Of such were those who persecuted St. John of the Cross in his last days, and helped him to enter heaven with greater pain and greater heroism. These were not the “calced” who caught him at the beginning of his career, but the champion ascetics of his own family, the men of the second generation, those who unconsciously did their best to ruin the work of the founders, and who quite consciously did everything they could to remove St. John of the Cross from a position in which he would be able to defend what he knew to be the Teresian ideal.

Sanctity itself is a living solution of the problem of suffering. For the saint, suffering continues to be suffering, but it ceases to be an obstacle to his mission, or to his happiness, both of which are found positively and concretely in the will of God. The will of God is found by the saint less in manifestations of the divine good-pleasure than in God himself.

Suffering, on the natural level, is always opposed to natural joy. There is no opposition between natural suffering and supernatural joy. Joy, in the supernatural order, is simply an aspect of charity. It is inseparable from the love that is poured forth in our hearts by the Holy Spirit. But when sanctity is not yet mature, its joy is not always recognizable. It can too easily be buried under pain. But true charity, far from being diminished by suffering, uses suffering as it uses everything else: for the increase of its own immanent vitality. Charity is the expression of a divine life within us, and this life, if we allow it to have its way, will grow and thrive most in the very presence of all that seems to destroy life and to quench its flame. A life that blazes with a hundredfold brilliance in the face of death is therefore invincible. Its joy cannot fail. It conquers everything. It knows no suffering. Like the Risen Christ, who is its Author and Principle, it knows no death.

The life of charity was perfect in the great Carmelite reformer, St. John of the Cross. It was so perfect that it can hardly be said to shine before men. His soul was too pure to attract any attention. Yet precisely because of his purity, he is one of the few saints who can gain a hearing in the most surprising recesses of an impure world. John of the Cross, who seems at first sight to be a saint for the most pure of the Christian elite, may very well prove to be the last hope of harlots and publicans. The wisdom of this extraordinary child “reaches from end to end mightily”. Lost in the pure wisdom of God, like God, and in God, he attains to all things. This saint, so often caricatured as an extremist, is actually beyond all extremes. Having annihilated all extremes in the center of his own humility, he remains colorless and neutral. His doctrine, which is considered inhumanly hard, is only hard because it is superhumanly simple. Its simplicity seems to present an obstacle to our nature, which has sought to hide itself from God in a labyrinth of mental complexities, like Adam and Eve amidst the leaves of paradise.