You know the worst part about Ash Wednesday falling on February 13th?

It means that February 14th is totally overlooked, and with it, the great Saints Cyril and Methodius.

Pope Leo XIII wrote of Cyril and Methodius that “As they began their journey through Bulgaria, which had already been converted to Christianity, they let pass no opportunity for increasing the faith. Upon reaching Moravia, they were met by a large crowd who had come with great desire and joy to greet them. Without delay the apostles strove to penetrate their minds with the doctrines of Christianity and to raise their hopes to heavenly things. They did this with so much force and with such energetic zeal that in a very short rime the Moravian people gave themselves to Jesus Christ.”

They let pass no opportunity for increasing the existing faith among those who already believed, and they raised the hopes of those who did not yet believe. If only half of that could be said of half of us who follow them! 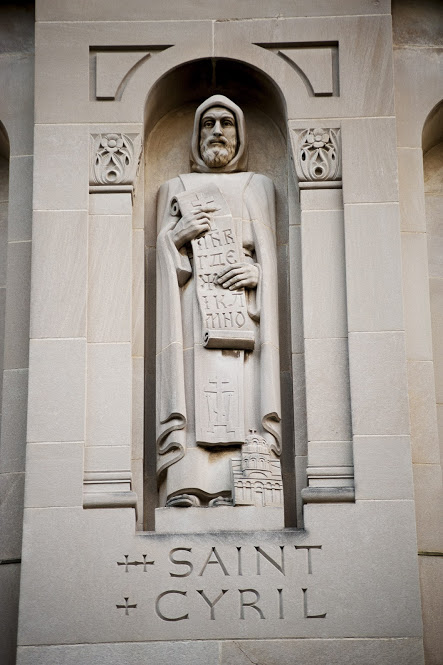 Of course things never go too smoothly with Saints: “They were accused of acting in opposition to ancient customs and contrary to holy rites in making use of the Slavic language for religious matters. However, they pleaded their cause with such indisputable and noble reasoning that the pope and all the clergy praised them and approved their course of action.” Ah, how wonderful it is to be able to gloss over the struggles of our past as a Church and to celebrate what has been achieved!

I have no doubt that I would choose Cyril’s life over Methodius’ any day. Cyril got to die early, known to this day as a monk. Methodius had to watch his brother die, and end up in exile while trying to run a troubled young diocese, as it were. The story of his life reads as one unending battle to convert others and simultaneously defend himself against accusations that he violated tradition in his work of conversion.

And after all of that they are still ignored by so many! 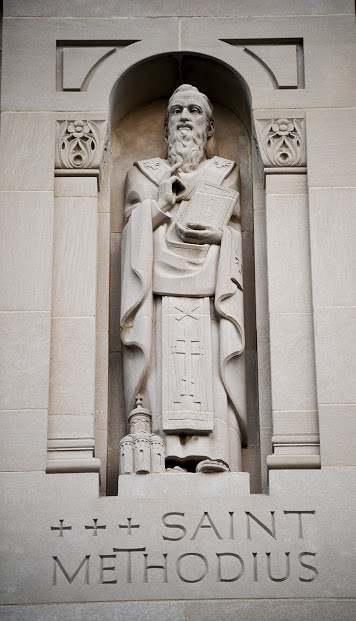 Prayer of Saint Cyril from the Office of Readings:

O Lord, my God, you have created the choirs of angels and spiritual powers; you have stretched forth the heavens and established the earth, creating all that exists from nothing. You hear those who obey your will and keep your commands in holy fear. Hear my prayer and protect your faithful people, for you have established me as their unsuitable and unworthy servant.

Keep them free from harm and the worldly cunning of those who blaspheme you. Build up your Church and gather all into unity. Make your people known for the unity and profession of their faith. Inspire the hearts of your people with your word and your teaching. You called us to preach the Gospel of your Christ and to encourage them to lives and works pleasing to you.

I now return to you, your people, your gift to me. Direct them with your powerful right hand, and protect them under the shadow of your wings. May all praise and glorify your name, the Father, Son and Holy Spirit. Amen.