This is the second in a set of posts about things that I tell my sisters. It may not make much sense to you if you do not come from the same place as my sisters and I do.

What I tell my sisters about “letting men lead” in the dating world.

Be very, very careful about following the advice of list posts when it comes to anything to do with discerning your vocation. Even if these posts happen to come from the most reputable sources.

Dating may be a game, but making friends for life–and in particular forming an exclusive  relationship with someone with whom you are willing to spend the rest of your life–is far too important to risk ruining by being anything other than yourself. 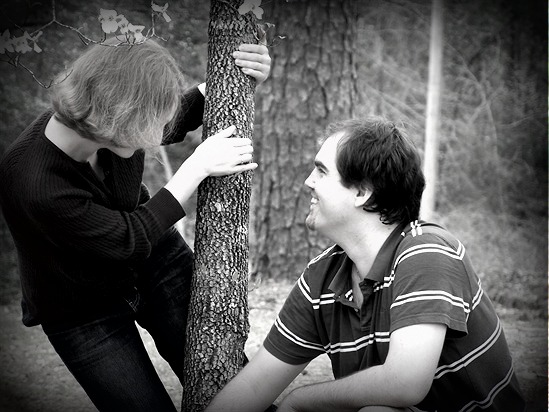 If you don’t know who you are, figure it out. I don’t mean that you have to run off and live in perfect solitude until you gain enlightenment about our essential self (though that is not a half bad idea if it appeals to you!). Interacting with others, including in the context of dating, can be a great way to learn about yourself. But at least keep self-discovery at the front of your mind for a while.

While you are learning enough about yourself to have half an idea of the sort of person you need to be with, cherish the friendships you make along the way. If you are a part of a singles group and you are getting lots of dates but no real friends, you might be wasting your flipping life. If you are praying about every man in your life as if he were a potential spouse, then you might be missing a whole lot more than a Friday night date.

If you are interested in attracting a man, look the part: look like yourself. After all, why would you want the romantic attention of a man who is not actually attracted to you? If you follow an All the Rules style approach to getting a guy’s attention by choosing feminine dresses and forcing smiles when it is not a reflection of your natural self, you may fail as a fake. Worse yet, you may succeed in attracting and marrying a man who is only attracted to you because you fill some role, because you put work into looking like someone you are not.

Never ask a guy out! Unless you actually want to go out with him. Don’t spend your time hanging out with a guy just to keep busy. Don’t ask a guy out to make another guy jealous.

Do not have an intimate friendship with a man who is not dating you. Unless you actually value friendships and want more out of life than to have an isolated marriage disconnected from a life of close friendship. If a man cannot have close friendships with women without dating them, then you should look very carefully at how he actually views women. If he is an egalitarian, then why does he feel the need to rule out half of humans in forming friendships? And if one subscribes to a not-entirely-sexist sort of complementarianism, then friendship with members of the other sex is crucial to living life fully. If a man claims to be a complementarian, but only wants to be friends with a woman if she is marriage-material, then chances are he only values women in–how shall we say this?–a very specific role. Run. Fast.

Once a man initiates a friendship, continue letting him pursue you as you get to know each other. Well, first of all you might need to figure out whether he is “pursuing” you at all. Initiating friendship is not the same as possibly pursuing marriage with someone. If a man is pursuing you, then you may need to do one of two things: either make clear the fact that you cannot pursue such a relationship with him at this time, or else pursue it together! If a man is worth your time dating seriously, then he is worth your time and emotional energy in working together to pursue a mutually beneficial relationship. Maybe you won’t end up married, but at least you will know that you can trust each other to be honest.

Do not buy into the idea that men must be leaders and women followers. And even if you like that idea, do not delude yourself into thinking that you can teach a man how to lead you for life by playing coy.

I knew all of this when I was dating, but still I inadvertently forced my now-husband to “pursue” me. Because I was so uncertain about our relationship and whether I could possibly be a good wife for him, I hesitated at every.single.step, thus requiring him to initiate every.sing.step if he wanted things to go anywhere.

I was never dishonest, but I kept a lot of my emotions to myself. The only times that I took initiative in defining our relationship were times when I believed that we needed to take a step (or five) back.

Because of this, he was forced into behavior that would serve as a perfect model for the male-leadership ideal. I might have been just a tad too hard to get, but I was pretty close to perfect for the passive woman.

Then we got married.

You know what happened? We were still ourselves.

Having space–nay, being required–to pursue me did not make my husband into a natural leader when we were finally married. Being passive and pathetic did not make me into a follower once married.

He remains a strong man who is happiest when he does not have to decide details of domestic life. I remain a control freak who knows how I want things to be done years before he has even realized there is something to be done. In fact, when we were first married I discovered that one of the very best ways to irritate him was to refuse to make decisions and instead force him into leading when he did not give a cat’s head about what happened other than that I was happy.

Furthermore, in the cases of my friends who played the pursuer/pursued while dating and then married, the women were left incredibly dejected.

The entire relationship is structured on something unsustainable. Once married, the woman is effectively possessed. Either she rejects authentic intimacy in hopes of keeping up her captivating sense of mystery, or else she finds that she herself has been caught. The man has no need to pursue her since she is now his, and he rightfully turns his attention to other things. The woman feels empty and disenchanted. Her romantic knight may be a perfectly good husband, but she did not really want a husband, a companion.

The husband, bored with his conquest, may be incredibly frustrated that his wife demands an unsustainable sort of attention. It stinks.

So, yeah. Don’t force the whole “men must pursue, women must be pursued” thing. If it works naturally with your personalities, then great. But if you have to squelch your natural tendencies in order to “let him lead” or coyly pull him into taking the initiative, then you are in fact initiating–you are instigating nothing other than a marriage based on a lie about your very self.

A few years of dating and engagement is never going to be enough to change your personalities, your gifts, your natural honest way of relating to others. A few years of dating can be used to set the framework for a fabulous partnership based on shared strengths, or it can be squandered in trying to play into stereotypes.

Never waste your time seriously dating someone you do not love. Never be dishonest with someone you love. Be generous with those you love. Be honest about who you are, and graciously give from the abundance of strengths which God has given you as a unique person.