The New Evangelization is Doomed (Because of Posts Like This One)

“The New Evangelization” is one of those Catholic terms which has been tossed around just enough that many people are completely confident about their confused understanding of it. I frequently see it used to mean “evangelization through new media.” If that were really all the term meant, then I think we could be confident that the Church is responding, and will continue to respond fully to the call for a New Evangelization.

But new media, while useful in its own ways, isn’t what the New Evangelization is really all about. Since it does not really matter what I say about these things, I will go with what my bishop, Donald Cardinal Wuerl, says. 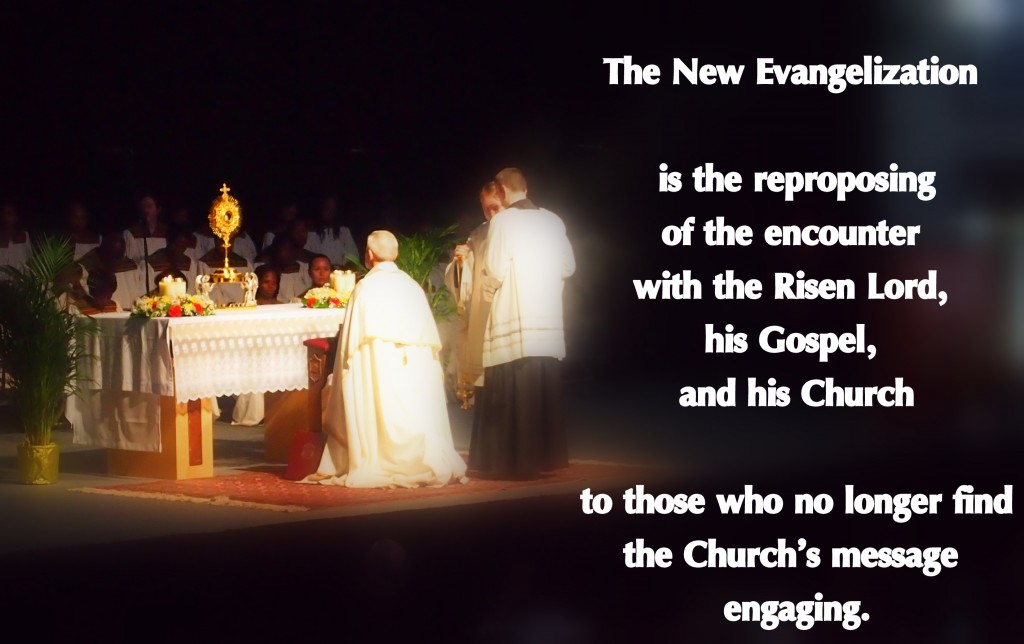 Cardinal Wuerl is often quoted as saying that “At its heart the New Evangelization is the reproposing of the encounter with the Risen Lord, his Gospel and his Church to those who no longer find the Church’s message engaging.” (one source)

You can read all about the New Evangelization here. Or you can read this long string of quotes excerpted from the letter:

The contemporary culture has reached a point where it turns off what is not immediately accessible. Our society prefers to listen in sound bites, rather than in semesters. Slogans replace thoughtful explanations. The broad advances of globalization over a relatively short span of time have had significant effects on daily life.

Entire generations have become disassociated from the support systems that facilitated the transmission of faith.

But no darkness, no matter how dense, can thwart or shroud the seed of new life waiting to emerge in this fresh moment. The missionaries in the first evangelization covered immense geographic distances to spread the Good News. We, the missionaries of the New Evangelization, must surmount ideological distances just as immense, oftentimes before we ever journey beyond our own neighborhood or family.

There are numerous people, particularly in the Western world, who have already heard of Jesus. Our call is to stir up again and rekindle in the midst of their daily life and concrete situation, a new awareness and familiarity with Jesus. We are called not just to announce, but to adapt our approach so as to attract and to urge an entire generation to find again the uncomplicated, genuine and tangible treasure of friendship with Jesus.

This is our mandate: to witness to others so that they reawaken to and rediscover the vital and inexhaustible friendship of Jesus Christ. Sisters and brothers, our eagerness and zeal for the task can be both the invitation and support for those who take their first steps back to the community of faith, as the ever deepening life within the seed is drawn to the light.

I hope all of us will see the New Evangelization as a lens through which we see everything that we are doing but now in the light of our understanding of how important it is for each of us to tell the story, share the excitement and be that leaven where the faith has gone flat and that salt where the faith has lost its zest.

In every action, our starting point and goal is Jesus Christ.

This pastoral initiative dedicated to the New Evangelization is the threshold of our own renewed, solid commitment, as a local Church, to the summons of Jesus. As we accept his promise of life in abundance, we also lean upon his promise so that we might find strength in every situation as we are called in new and, perhaps untried, directions.

Culture is the field of the New Evangelization. Culture refers to the daily ethos, the various networks of understanding and meaning that give rise to the many everyday connections between the person, community and society. Culture forms the deeper and more vital link that relates the person to the community and the community to society.

Every moment becomes a new opportunity to connect another person with the abundant Springtime that God promises. In this, we are protagonists of hope.

Protagonists of hope. How often the Church calls for the impossible!

I have very limited hope for the New Evangelization when I see the way that devout Catholic women interact online. Based on my (admittedly limited) experience, I believe that the New Evangelization is doomed. Apart from divine intervention, devout Catholics will choose to fight about appropriate etiquette rather than answer the Church’s call to share Christ with the faithful not in full communion with the Church’s ideals.

This unwillingness to participate in the New Evangelization has been made incredibly clear in recent backlash to a linkup where Catholic women post about what they wore to church on Sunday. Normal people outside of the limited target audience would probably yawn. But devout Catholic women are hardly normal. Instead of ignoring something which does not seem useful to them personally, they will invest the emotional energy required to tear it apart.

If you are not from these circles you might think that this is just typical female cattiness. But I am immersed enough to believe that these women are sincere rather than jealous. Unfortunately, giving them the benefit of the doubt turns out to make their reaction seem appalling rather than annoying.

One example is this comment quoted publicly on another blog:

I see this whole trend (What I Wore Sunday) coming out of discontentment with living such a hidden life. We all so want others to recognize the good that we do…I think this is an attempt to show that we are hip and trendy even if we do stay home. It’s like saying..” I still got it” or “See I can have it all!” instead of being content to live the hidden life of Nazareth…

Read this with the belief that it was written in good faith and sincerity by a woman who considers herself to be fully living out the call of the Church, by a woman who sees herself as properly understanding the beauty of the call of Christ while other women are failing.

Read it and weep.

Because if you read this as written (and subsequently quoted) with sincere spiritual  reservations about this linkup, then you cannot help but be horrified by the fact that the response of these devout women is one of absolute defiance of all that is called for by the New Evangelization.

Let’s say that these devout women are correct in their understanding. Let’s say that this linkup does detract from all that we hope to receive in participating in Sunday Mass. What then?

Well, if one cared to see with the lens of the New Evangelization, she would seek to repropose Christ to her sisters who have failed to appreciate the great beauty of the life to which they are called and instead embraced vanity. She would take 10 seconds to read about the women behind the linkup. That would allow her to see that both women are very young and that one of them is not yet even Catholic. It is clearly inappropriate to expect these two women to be the spiritual peer of our hypothetical devout woman who has spent years being formed in the faith.

Thus a devout woman who cared about the call of the New Evangelization would seek to reach these women in a way that enabled her to bring them back to a more faithful life. Perhaps she would follow the example of Our Lord who ate with prostitutes and lower herself to actually participate in the linkup. Perhaps she could not bring herself to risk the scandal of participating in something she believes to be wrong, but she could still comment on the blogs of her lost sisters and build relationships with them.

But this is a dream, not reality. In reality, devout Catholic women like to criticize without going to the bother of building relationships which allow for both conversation and conversion. They would rather live in a limited bubble of perfection than to squander their precious time reaching out to others who do not meet their standards.

The New Evangelization is doomed. Devout Catholics must undergo a radical conversion which enables them to find drawing others back to Christ more appealing than stepping back and criticizing those who do not live up to their standards. Unless this happens, the bishops are wasting their time talking about a New Evangelization.

My bishop has put an incredible amount of work into promoting the New Evangelization. He calls me to be a protagonist of hope.

Instead I offer you this post in beautiful irony. I make no claim to be a devout Catholic woman, but I fail right along with them.

Want to get started? Check out Seven Things Catholics Should Know About the New Evangelization