John of the Cross Novena: Day 3 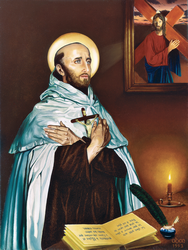 O glorious St. John of the Cross, through a pure desire of being like Jesus
crucified, you longed for nothing so eagerly as to suffer, to be despised,
and to be made little of by all; and your thirst after sufferings was so
burning that your noble heart rejoiced in the midst of the cruelest torments
and afflictions.

O my beloved father St. John of the Cross, your continual prayer merited for
you the name of Ecstatic Doctor, favored with special graces in the guidance
and direction of souls.

I humbly beg you to enlighten my soul and to give me a relish for holy meditation that, detached from earthly things, I may love God alone and desire heaven only.

Obtain for me also the special grace I ask through your intercession during this novena, if it be for the glory of God and for my salvation (make request).

From John of the Cross: The person, His Times, His Writings by Michael Dodd, O.C.D. (read the rest here)

To begin this series of lectures on St. John of the Cross, I want us to reflect on spontaneous images or associations we have for saints. St. Francis: gentle figure surrounded by birds entranced by his preaching. St. Thérèse: childlike tenderness scattering roses. St. Teresa of Jesus, Teresa of Avila: laughing and vital, dancing before her nuns with castanets. And St. John of the Cross? What image do you have? A friar on Christmas Day picking up a statue of the Christ child and dancing around the room? A small friar compo sing songs and singing to entertain his companions on a hot and dusty journey? A careful administrator, giving advice on how to deal with unscrupulous landowners over the pur chase of a convent? An artist drawing sketches to give to the sisters whose confessions he hears, or designing the cloister of a monastery or supervising the construction of an aqueduct? A manual laborer working in the garden, picking chickpeas and threshing them? A religious superior surrounded by political intrigue who concerns himself first with making sure the sick are fed, even preparing and serving them the food himself? The poet, the lover of nature, the beloved brother? What is your image?

PAST IMAGES OF THE SAINT

Yet when he died, crowds of the poor flocked to view his body, to kiss hands and feet. In spite of the efforts of friars to prevent it, visitors tore pieces from his habit to remember him by. The cities of Ubeda, where he died, and Segovia, to which his body was transferred secretly two years after his death, fought over possession of the remains, petitioning all the way to the Holy See for resolution. The common people venerated him so much that it actually delayed his beatification, because the reverence shown went beyond that permitted by the Church until after serious and official inquiry has pronounced on the virtues of one with a reputation for holiness. For a while the place where he was buried had to be concealed to prevent people from leaving flowers or candles there. When visiting Ubeda some years ago, I was told that the city, long before John’s beatification, had gone so far as to proclaim him co-patron along with the archangel Michael. Do people respond thus to a saint of stone?

Some may be inclined to say that it does not matter what image you have of John of the Cross, since it is primarily his writings that interest us today. Yet people will also say that they find John of the Cross difficult to read or to believe or to accept. It is a commonplace to say that John of the Cross’s writings should not be given to beginners in the spiritual journey or that no one should read them without the guidance of a knowledgeable director. Yet he did not write his works for specialists in human development or those with doctorates in spiritual theology. He wrote for nuns and friars, novices and laywomen, for any who love God and desire God with passion. These people received his writings with joy and understanding. For them the writings were a precious gift, not an incomprehensible mystery. They were light, not obscurity. On their lips we could place the words of Jessica Powers about John’s books, written two years before she entered Carmel as Miriam of the Holy Spirit:

Out of what door that came ajar in heaven

drifted this starry manna down to me,

to the dilated mouth both hunger given

Who bore at midnight to my very dwelling

the gift of this imperishable food?

my famished spirit with its fragrance filling,

The mind and heart ask, and the soul replies

what store is heaped on these bare shelves of mine?

The crumbs of the immortal delicacies

and I, so long a fosterling of night,

Why this difference? I believe that it was at least in part because they knew the hands from which they received the writings that John’s first disciples found them to be “immeasurably sweetened/wafers of light.” It is at least partly because other readers do not know him that his teaching seems dry and cold. In order for us to experience them as light, we need to know the hands that wrote the words: hands that cared for the sick, hands that sketched and drew, hands that were calloused with labor, hands that clapped in rhythm to a dance. It will be my purpose, then, to speak about the person of John of the Cross, to tell the story of the man as a necessary prelude to reading the writings. The nature of the presentation will be primarily biographical, drawing attention to how some of the more important events shaped John’s personal vision and his writings. For some this will be familiar territory, but I hope you will get some new insights. I found when trying to prepare that I had too much I wanted to say, but I have cut it down in hope of staying brief. Inevitably this means some things will remain unmentioned, other points only alluded to. I hope that you may be encouraged, though, to seek out more information on John yourself, to get to know the person.